Anton’s Well Theater Company’s derives its name from Anton Chekhov’s belief that every person should leave something useful behind when they depart this earth—he thought digging a water well would be a great legacy.  Creating theater is our water well. We’re an East Bay company devoted to presenting Bay Area Premieres or rarely performed plays that have compelling theatrical language and feature local theater artists.

For info on the plays we’ve produced, please see the Past Shows tab at this website. 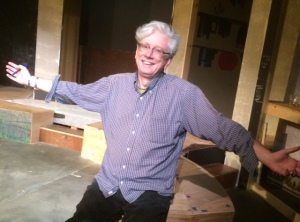 Robert Estes (Artistic Director) has directed OLD TIMES, OR,, DYING CITY, WHAT RHYMES WITH AMERICA, AGES OF THE MOON, TENDER NAPALM, THIS WIDE NIGHT, THE HUMAN EAR, 4.48 PSYCHOSIS, dirty butterfly, ESCAPED ALONE, and HERE WE GO for the company. For other East Bay companies, he has directed CURSE OF THE STARVING CLASS, OTHER PEOPLE’S MONEY, HEARTBREAK HOUSE, ARCADIA, HARMONY IN HIDING, ROCK’N ROLL, FALSTAFF! and THE REAL THING. Robert was born in Oakland and has lived in the Bay Area his whole life. He graduated from UC Berkeley way back in the long ago day with a B.A. in English. He welcomes you to Anton’s Well and would love to hear from you at antonswell@gmail.com