Check out this short video that introduces This Wide Night to the Bay Area. Created by Chris Scott. This Wide Night opens on December 1 at the Berkeley City Club. Runs Friday-Sunday through December 17. For more info, see now playing. 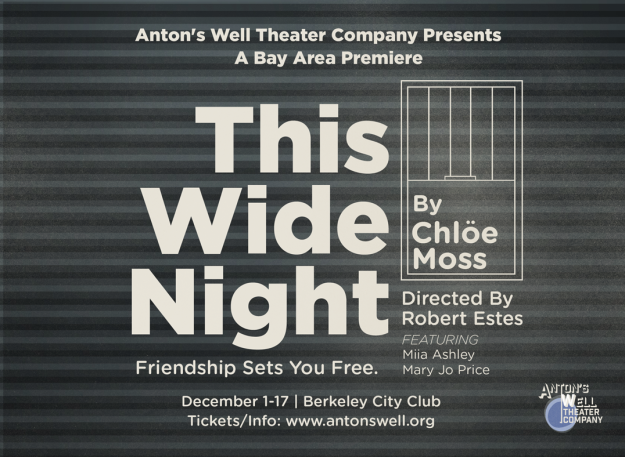 Anton’s Well Theater Company is proud to announce the Bay Area Premiere of This Wide Night by English playwright Chloë Moss. The play opens on December 1 at the Berkeley City Club and runs Fridays-Saturdays, 8PM, Sundays 2PM through December 17.

The play won the prestigious Susan Smith Blackburn Award in 2008. The New York Times says that the two female former prisoners characters are “shaped with compassion” and that the play “feels more packed with compressed, complex life than a season of television crime dramas.”

In our production, Miia Ashley plays Marie. Mary Jo Price is Lorraine. Robert Estes is the director and William D. Razo is the assistant director. We hope to see you at the Berkeley City Club in December!

Two reviewers came to opening night of Tender Napalm, and both had wonderful things to say. Vic Cordell in For All Events writes:

…. The strongest points of the production are the performers and the choreography. Willem Long and Anastasia Barron are outstanding as the characters. They both exude stage presence. Long commands the stage with an animal-like stalking ferocity, and Barron matches him in formidable yet feminine response. They each roar with enthusiasm throughout – gritting, smirking, tantalizing, and taunting. One strength of Ridley’s dramatic design is that it places focus on the actors, as well as tremendous burden. These actors answer the call.

Choreographer Bridgette Loriaux has created sensational end-to-end movement design involving robust elements of acrobatics and modern dance, with nods to pas de deux and ninja and more. The choreography coordinates beautifully with and enhances the drama. Often, the actors are vocalizing at full bore while twirling, thrusting, leaping, writhing, or wrestling. It’s like delivering a maximum volume, extremely emotional acting performance and a highly athletic dance performance – at the same time. Loriaux and director Robert Estes extract about as much power from the script as you can expect….

Full review at For All Events, Tender Napalm

On a bare stage, with the minimal assistance of an effective lighting design by Nate Bogner and an excellent original score by Greg Zema, performers Willem Long and Anastasia Barron dig deep into a relationship which is, indeed, as explosively dangerous as napalm, and as tender as a nursing mother. The dance is intense, at times acrobatic, the words and movements almost too full of emotion.

It is astonishing that work that is simultaneously this complex and this opaque can be so riveting, but for the nearly two hour performance I attended there was no fidgeting among the audience members who sat surrounding the actors on three sides with no platform to separate them from the action. We were with these two in a dive into the depths of our shared unconscious, calling up healing spirits in what seemed to be a genuine crisis.

Attendees who allow the images and sounds to wash over them, without worrying too much about making sense of everything, should have a memorable time with “Tender Napalm.” Those familiar with the analytical psychology of Carl Jung, and, particularly, the imagistic psychology of Jung’s disciple, James Hillman, will be even more profoundly rewarded. ….

… “Tender Napalm” is a journey into another world, that lies just beneath the surface of day to day life. It is both familiar and strange, and if you attend with deep attention, you may find that it changes you as surely as would a voyage to a far away primeval island.

Get your tickets now, the show only runs two more weekends, and closing weekend is starting to fill up.

The New York Times calls Tender Napalm a “fierce, transfixing and ultimately very moving play” written by “a writer of daring and satanic imagination, with a sui generis vocabulary to match.” The play is filled with language of graphic violence and shocking imagery, so please note that it may not be for everyone, but in its own way, Tender Napalm is beautiful, and ultimately, perhaps even romantic.

The play centers on two people: WOMAN and MAN, as they use their ripe imaginations in a story-telling battle for love. The play’s kaleidoscopic, emotional journey will feature intense movement choreographed by Bridgette Loriaux. The combination of brilliant writing and expressive movement promises to make Tender Napalm a thrilling theatrical event. 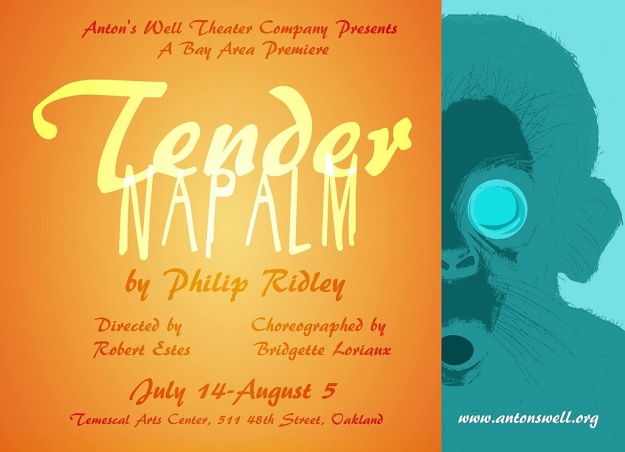